The country is situated west of Israel and has borders to the north with Syria and to the east with Iraq and Saudi Arabia.  Its capital is Amman.  The Dead Sea forms part of the border with Israel and it has a small coastline on the Red Sea.

The first stamps of Jordan were EEF (Egyptian Expeditionary Force) stamps overprinted Arab Government of the East in Arabic.

Jordan provided stamps for the West Bank between 1948 and 1967.  Before the West Bank was incorporated into Jordan in 1950, Jordanian stamps overprinted Palestine in Arabic and English were issued (from 1948 to 1950).  After 1950, stamps of Jordan were used in the West Bank until it was occupied by Israel in 1967.

From 1949, Jordanian stamps were inscribed The Hashemite Kingdom of Jordan, and often since 1983, this has been abbreviated to the H.K. of Jordan. 35th Anniversary of the International Declaration of Human Rights Series 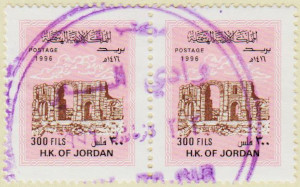 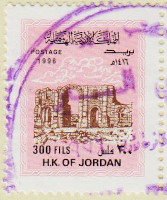