The Kingdom of Saudi Arabia is situated in western Asia, and covers almost the whole of the Arabian Peninsula.  The country is bordered by Jordan and Iraq in the north, Kuwait in the northeast, Qatar, Bahrain and the United Arab Emirates in the east, Oman in the southeast and Yemen in the south. The country has a border on the Red Sea as well as the Persian Gulf.  The capital is Riyadh.  The official language of the country is Arabic.  The official religion is Islam.  The country is often called the “Land of the two Holy Mosques” which refers to Al-Masjid al-Haram (in Mecca) and Al-Masjid an-Nabawi (in Medina).

Until 1932, the country was known as the Kingdom of Hejaz and Nejd.  Before that they were both separate countries.  Between 1865 and 1881, the Turks opened post offices in the country.  In 1916, Hejaz became independent from Turkey and the country issued its own stamps.  In 1925, the Sultan of Nejd conquered Hejaz. From 1926, stamps of the new kingdom were issued. The name of the country was changed to the Saudi Arabian Kingdom and from 1934 the first stamps marked Saudi Arabia were issued. Burning of Algiers Library in 1962 Series 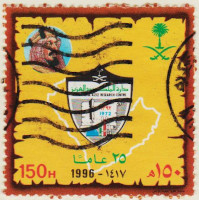