Venezia Giulia is today divided amongst Croatia, Italy and Slovenia.  The area was formerly part of Italy.  During the Allied occupation, stamps were issued in 3 different groups:

Not much value was ever credited to these stamps. 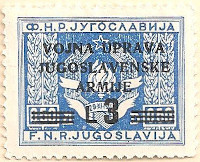